Each year, Mound Westonka High School celebrates standout athletes from the graduating class. This year’s celebration took place on May 20 in the Little Theater, with student-athletes and their parents in attendance. 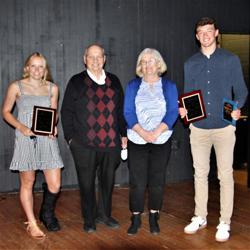 Each year, Mound Westonka High School celebrates standout athletes from the graduating class. This year’s celebration took place on May 20 in the Little Theater, with student-athletes and their parents in attendance. Included in this year’s recognition are the Yost-Haddorff-Leopold and Athena Award nominees and winners, as well as senior three-season athletes, declared college athletes and state tournament participants.

Activities Director Jeff Peterson recognized and congratulated the senior athletes on their accomplishments, pointing out that the combined GPA of the seniors being recognized is 3.521.

Katherine Johnson and Mitchell Krebsbach were recognized as this year’s school-level Minnesota State High School League Triple “A” winners. The Triple “A” program rewards a senior boy and girl in each high school in Minnesota for outstanding achievement in Academics, Athletics and the Arts.

Peterson recognized 13 seniors who competed at state this year.

After competing in three consecutive section finals, the MWHS girls’ hockey team made it all the way to the quarterfinal match of the state tournament this year. In addition to an outstanding season on the ice, the team received the Section 2A Team Academic Award. Seniors who competed at state were Jenna Brustad, Brittney Davis, Avery Finck, Callie Nelson, and tri-captains Taylor Leonard, Grace Peterson and Brooke Pioske. Brustad, Leonard, Peterson and Pioske were also selected to play in the Minnesota Girls Hockey Senior Classic.

Grace Peterson represented Westonka at the 49th Annual Athena Awards, which recognized more than 50 senior women from public and private high schools in the Minneapolis metro area. Peterson was recognized locally for winning both the Athena and Yost-Haddorff-Leopold outstanding female athlete awards. Peterson was a standout athlete on the White Hawks tennis, hockey and lacrosse teams.

“Grace Peterson is truly deserving of this recognition,” said Peterson. “She is an outstanding student athlete who works hard, has a great attitude, is a great teammate and an all-around great person. Congratulations Grace, we’re proud of you!”

Other finalists for the 2021 MWHS Athena Award were seniors Greta Blanck, Avery Finck and Brooke Pioske.

The award began as the Yost Award in 1953, honoring the late Frank Yost—a local pharmacist and ardent community sports supporter, who died in 1952. In 1994, the award became the Yost-Haddorff-Leopold Award, also honoring the memories of Oscar Haddorff, who died in 1970, a year after retiring as a 25-year MWHS teacher, coach and athletic director; and Cory Leopold, a 1988 MWHS graduate and standout high school and college wrestler, who was killed in a car accident in 1993. The scholarship component was added to the award at that time and is given to the school’s top male and female athletes.

Bob Haddorff and Carolyn Leopold were on hand for the recognition ceremony. “I would like to thank the Haddorffs and Leopolds for their continued support of our student athletes and Mound Westonka school community,” said Peterson. “We are so fortunate and appreciate all you do!”

Leonard received 12 varsity letters in his MWHS career – four each in football, basketball, and strength and conditioning.

“Being honored with this award is a great accomplishment,” said Peterson. “We are proud of Logan and congratulate him on a job well done.”

Athletes who have committed to playing at the collegiate level include: