For the second consecutive season, the White Hawks football team has finished the regular season undefeated and has clinched the No. 1 seed in Section 6AAAA to go along with home field advantage throughout the section playoffs. 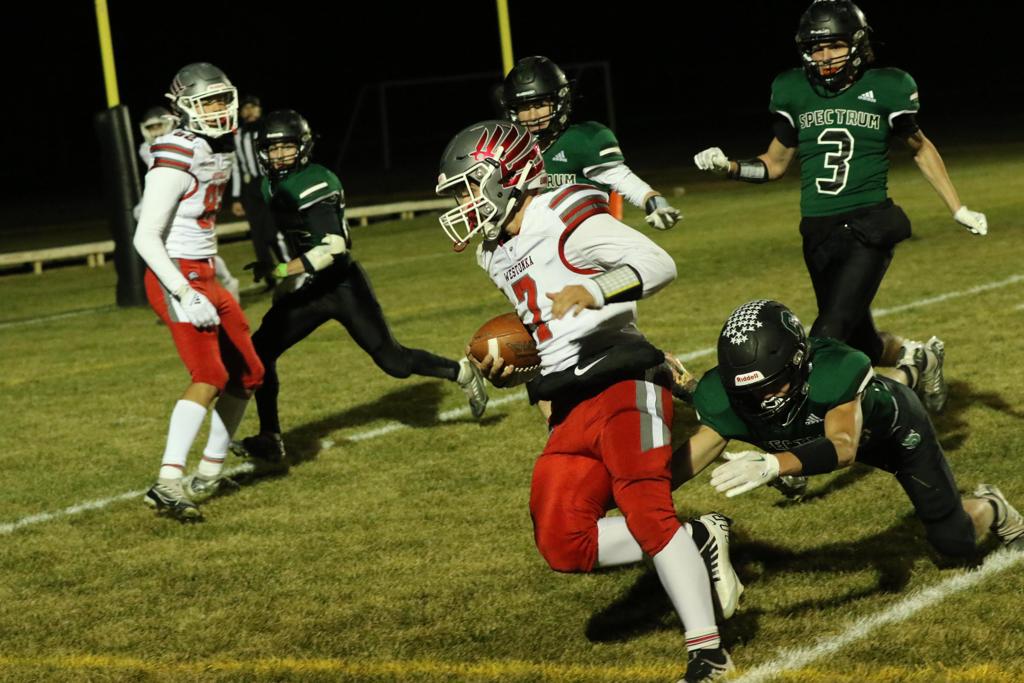 For the second consecutive season, the Mound Westonka football team has finished the regular season undefeated and has clinched the No. 1 seed in Section 6AAAA to go along with home field advantage throughout the section playoffs. The White Hawks (8-0) dispatched Spectrum (5-3) 56-21 in a Twin City District affair on Wednesday evening in Elk River. The midweek game allowed for MEA Break and the short week for the quarterfinal games next Tuesday. Westonka will host the winner of the Delano and Zimmerman game next Saturday, October 29, at 1 p.m.

The White Hawks were stung early by the Spectrum offense when quarterback Tanner Gangl hit Blake Femrite for a 15-yard touchdown on their first possession. It was the first time all season that the Westonka defense gave up a first quarter score, and only the second time all season that they have trailed in any game. The two-point conversion run was unsuccessful, however, giving the Sting a 6-0 lead.

Senior running back Tyler Albert stayed hot, despite the cool temperatures, rushing for 141 yards on just 15 carries while finding the end zone four times. His first touchdown, a 6-yard run, gave Westonka a 7-6 lead at the end of the first quarter. Albert finished the regular season with 968 yards rushing (fifth in Class 4A) and 15 touchdowns, which puts him in the top 15 in the state and fourth in 4A.

Junior quarterback Carter Reinbold continued his solid play throwing for 169 yards on 11-of-15 passing. He found sophomore wide receiver Max Kraay on a double-move corner route for a 17-yard touchdown early in the second quarter and a 14-6 advantage. Reinbold threw for 1,073 yards (134.1 per game), 17 touchdowns and just two interceptions during the eight-game regular season. Albert then punched it in from three yards out before Reinbold called his own play on a three-yard run making it 28-6 for the visitor’s.

Spectrum scored again when Gangl threw a 13-yard touchdown to Jamison Waknitz. The duo hooked up again on the two-point try making it a 14-point game late in the second stanza. Westonka came right back, however. Reinbold hit senior Fletcher Anderson on a 34-yard swing pass inside Spectrum territory. A few plays later, Reinbold (six carries for 63 yards) scrambled out of the pocket to his left, avoided numerous oncoming tacklers, and dove inside the left pylon for a 15-yard TD and a comfortable 35-14 halftime lead. The White Hawks outscored their opponents 158-15 in the second quarter during the regular season, averaging nearly 20 points.

Westonka opened up the second half with a 54-yard run by Cam Peterson. The senior tight end took an inside handoff on an end around and burst through the middle of the Sting defense galloping inside the Spectrum 15-yard line. Albert carried it from there on a 4-yard run to make it 42-14 early in the third quarter. On their next possession, Reinbold handed the ball to Albert who was stacked up behind the line-of-scrimmage but bounced it out to the right and scampered in from 11 yards out. Gangl, who is one the best QB’s the Westonka defense has faced all year, found his favorite target once more for a touchdown, hitting Waknitz on a seven-yard pass play.

Senior quarterback Gavin Leuthold came on in the fourth quarter and connected with junior TE Isaac Paul on a swing pass to the left. Paul took the ball down the left sideline, got a great block from senior WR Cale Hendrycks, and went untouched for a 68-yard touchdown. The passing TD was the first of Leuthold’s career. Senior Kade Tappen led the White Hawks with five receptions, finishing with 60 yards. Kraay had three catches for 45 yards and a touchdown. Junior Jacob Hansberger carried the ball eight times for 51 yards.

Junior DL Drake Woodruff led the Westonka defense with seven tackles and a QB sack. Sophomore linebacker Ray Beiningen had six tackles (3 solo) and a tackle-for-loss, while fellow sophomore Aaron Kroese tallied four solo tackles to go along with three defended passes. Senior Will Wallace had five tackles (four solo) and seniors Fletcher Anderson and Simon James both finished with four tackles. Senior Matt Oko and sophomore Beck Jenson both gobbled up another quarterback this past week giving them six QB sacks a piece, which is good for second in 4A and Top 15 in the state. 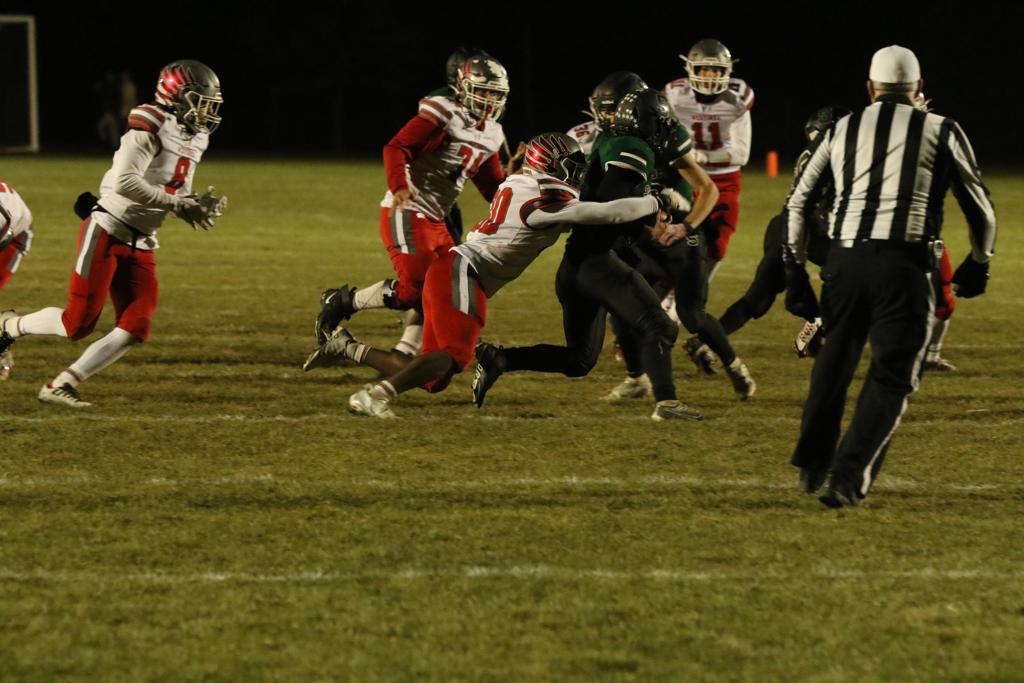 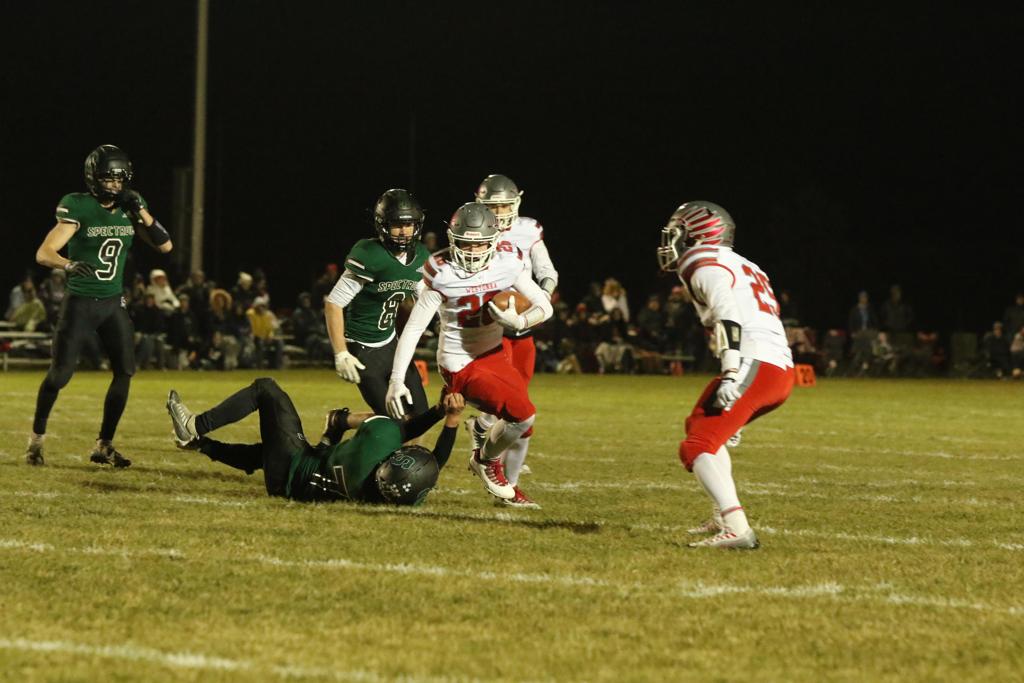