Mound Westonka High School Theatre is proud to present "The Curious Incident of the Dog in the Night-Time" March 11-13. 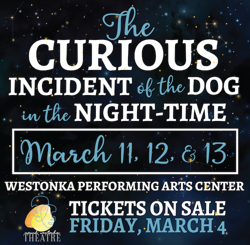 Mound Westonka High School Theatre is proud to present The Curious Incident of the Dog in the Night-Time, a story about difference, being an outsider and seeing the world in a surprising and revealing way. Performances will be held at the Westonka Performing Arts Center (PAC) March 11 and 12 at 7 p.m. and March 13 at 1 p.m. Tickets are $10 for adults and $5 for students/seniors and are available online beginning Friday, March 4. All district staff will be admitted free with a staff ID.

The Curious Incident of the Dog in the Night-Time, a play by Simon Stephens based on the Mark Haddon novel, follows the story of Christopher Boone, a 15-year-old who is exceptional at math, but finds people confusing. The play opens with Christopher discovering his neighbor’s dog dead in their garden. Despite his father telling him not to get involved, Christopher decides to investigate the death of Wellington. In doing so, he discovers many revealing truths about his family, and through his investigation and adventures, he discovers wonderful truths about himself.

Harms said her role in the play has been a “great educational tool” for this production, both for the students and herself. “It is the true meaning of ‘the show must go on’,” she added.

“I note the obvious differences

Between each sort and type,

But we are more alike, my friends,

Than we are unalike.” (Maya Angelou)

This Tony Award winning adaptation of the novel, The Curious Incident of the Dog in the Night-Time, explores this theme and many others. “It's a story of bravery, love, loss, empathy, connection, inclusion and acceptance,” said Director Joe Lawrence. “It's about the interconnection between all of us and the importance of noticing.”

In the play, Christopher notices everything. He says, "I like looking at the rain... because it makes me think how all the water in the world is connected. This water, this rain, has evaporated actually from somewhere like maybe the Gulf of Mexico maybe, or Baffin Bay, and now it's falling in front of our house."

“All of the world's water is connected, and even though we may not notice or comprehend it, all of its people are connected too,” said Lawrence. “We forget this. We should not.”