Conference competition came to a close October 30 for the Mound Westonka/Holy Family (MWHF) girls swim and dive team with a third-place finish. 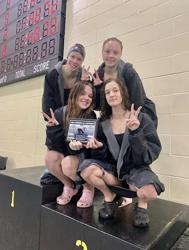 Team relay events had the crowd on their feet. Kr. Collins, Johnston, Springer and Storm took third in the 200 Medley Relay with the team of Ness, Johnson, Ka, Collins and I. Sullivan finishing in seventh.  Dueck, Storm, Johnston and E. Ries were on the podium with a second-place finish in the 200 Freestyle relay with A. Ries, I Sullivan, O. Sullivan and Kr. Collins finishing fifth. E. Ries, Springer, A. Ries and Dueck finished third in the 400 Freestyle Relay with Ness, Ka. Collins, French and Johnson finishing fifth.

Seventh-grader Bailey Monette was the youngest diver at the meet and took second overall.  Monette was aggressive in her dives, earning her place on the podium among the powerhouse Delano divers who finished first, third and fourth. MWHF’s Britta Elliot (eighth grade) finished eighth.

The next competition for Mound Westonka/Holy Family is the Section meet hosted by Willmar November 11 and 13.