The Westonka cross country team kicked off its season with a bang August 26 in Grantsburg, Wisconsin. All three White Hawks teams took first place, providing for a great start and a fun bus ride home. 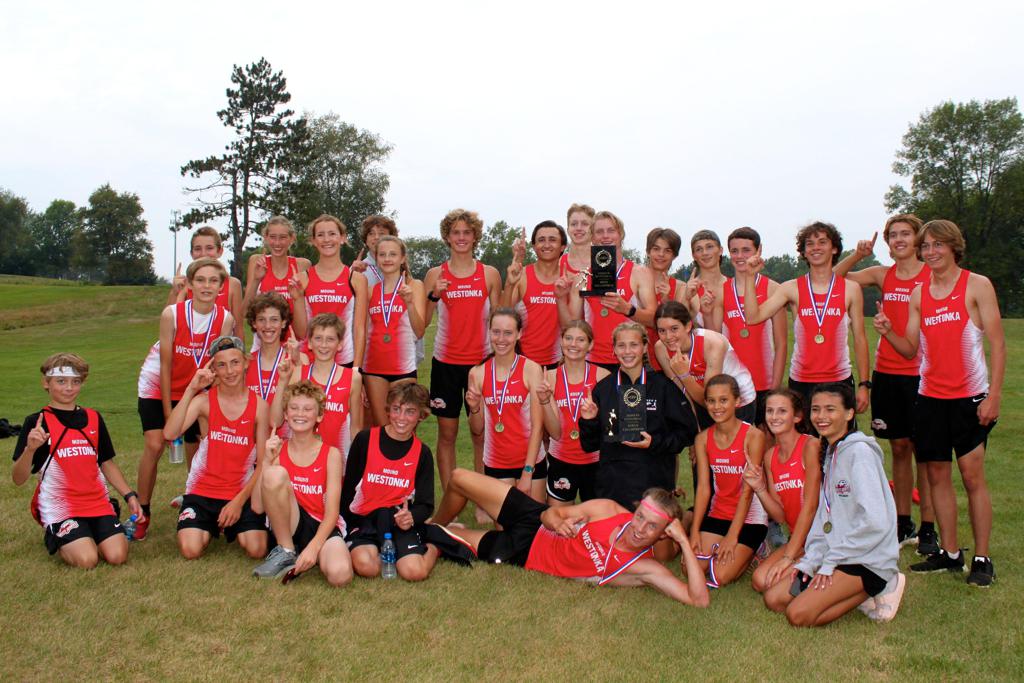 The White Hawks celebrated their three team wins in Wisconsin 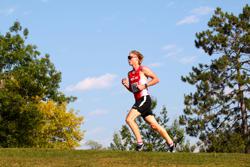 The Westonka cross country team kicked off its season with a bang last Thursday in Grantsburg, Wisconsin.  All three of the White Hawk teams took first place, providing for a great start and a fun bus ride home.

Many long hot hours training over the summer contributed to the team’s success in Wisconsin.  Coach Butch Humbert noted, "We have come a long way since early June in terms of our aerobic capacity.  The core of our team was very out of shape (for distance running) at the end of May, but many kids committed to the summer program and it has made a huge impact.  We have also been blessed by some new kids coming out for CC, and it was great to see them get their first race experience last week."

The team is led this season by a group of veteran runners.  According to Humbert, "Our Captains and their leadership this year is phenomenal!!  Alli (Soule), Laura (Sunnarborg), Lance (Nemecek), Max (Epsky), Josh (Engesser) and Owen (Paul)  bring experience, maturity, smarts and a fun loving spirit to the team!  I can trust them to be super role models and make decisions for our team. I'm also thankful for the support of our parents.  I consider parents to be assistant coaches and appreciate that they support the team and help out their kids at home."

Most of the team made the trek straight to Wisconsin from a team training trip in St. Cloud.  "One of the unique things about our program is that we sprinkle in many special practices and events throughout the season.  One of the biggest and best of those is our Training Trip to St. Cloud, which just occurred and was a huge success.  Our program emphasizes team bonding, cross training and strength training, flexibility and mobility work, and learning more about training, nutrition and sleep every week of the season,” shared Humbert.

Storms were forecasted for the entire day in Grantsburg, but the skies somehow cleared at race time, providing a warm sunny setting at the hilly Grantsburg Golf Course.  The Varsity Girls team was the first race of the day, and the team was ready.  White Hawks claimed seven of the top ten spots, and took the team trophy with ease.  Junior Laura Sunnarborg led the way, earning second with a time of 22:21.  Freshman Audrey Kirscht followed Sunnarborg in third, with a time of 23:23.  Close behind Kirscht was Senior Alli Soule in 23:30, followed by freshmen, Brooke Garlock (fourth in 23:47), Gabby Callahan (fifth in 23:53), and Mari Engesser (seventh in 24:02).  Rounding out the top runners for the White Hawks was rookie seventh-grader Sophia Engesser, placing eighth in 24:48.

The next race belonged to the White Hawks Varsity Boys who narrowly took first over the six other teams in competition. Senior Lance Nemecek claimed the top spot for the White Hawks, earning fourth place in 18:33.  Fellow seniors Josh Engesser (fifth in 18:44) and Max Epsky (sixth in 19:32)  followed Nemecek.  Sophomore Charlie Paul also earned a top ten spot, finishing ninth in 19:54, and Junior Jacob Trost completed the varsity team score, placing eleventh in 19:58.  In cross country, normally only the top five runners count, but in this race, the key to the White Hawks win came down to the sixth and seventh runners.  Seniors Wyatt Carlson and Owen Paul took twelfth and fourteenth place, ahead of Grantsburg’s fifth runner, helping the White Hawks to beat Grantsburg by two points.

The final race for the White Hawks was the Boys Middle Schoolers.  Following their elders’ lead, the eager youngsters came out on top, easily beating the other seven teams.  Eighth grader Gavin Thelen led the pack, winning the 2.5K in 9:55.  Rookie eighth grader Luke Sunnarborg was the next White Hawk, placing fourth in 10:16.  Seventh graders provided the remaining scoring spots for the White Hawks with Drew Carlson at sixth in 10:37, Brendan Rashleger at eleventh in 10:48, and Owen Trost at thirteenth in 11:10.

After winning the trifecta at their first meet, the White Hawks are ready to hit the trails for more training.  According to Coach Humbert, "I like scheduling practices at different venues - it is good for us physically but especially mentally.  With all the construction over the past 20 years on the high school grounds and in the area, it is actually a poor practice location for us.  So we go to Gale Woods, Carver Park and a few other places now and then to make it work.  We are so fortunate to live in an area with so many trails, parks, and open areas that we can access. That is one of the many beautiful attributes of CC - scenic runs that are peaceful and productive!"

Looking ahead, Coach Humbert shares, "As for our upcoming meets (at Maple Lake vs. 11 teams on September 3rd, and at Montgomery vs. 35 teams on September 9th), the competition will get a bit tougher, but we will be well placed.  At our pre-season meeting in May I told the team that I believed this could be a special year.  I'm not sure they believed that or understood what I meant, but we are building momentum for a fun and successful season and I couldn't be more excited!!!"