The Mound Westonka football team overcame a sluggish first half in a hard fought 28-14 win against visiting Fridley on Sept. 30. 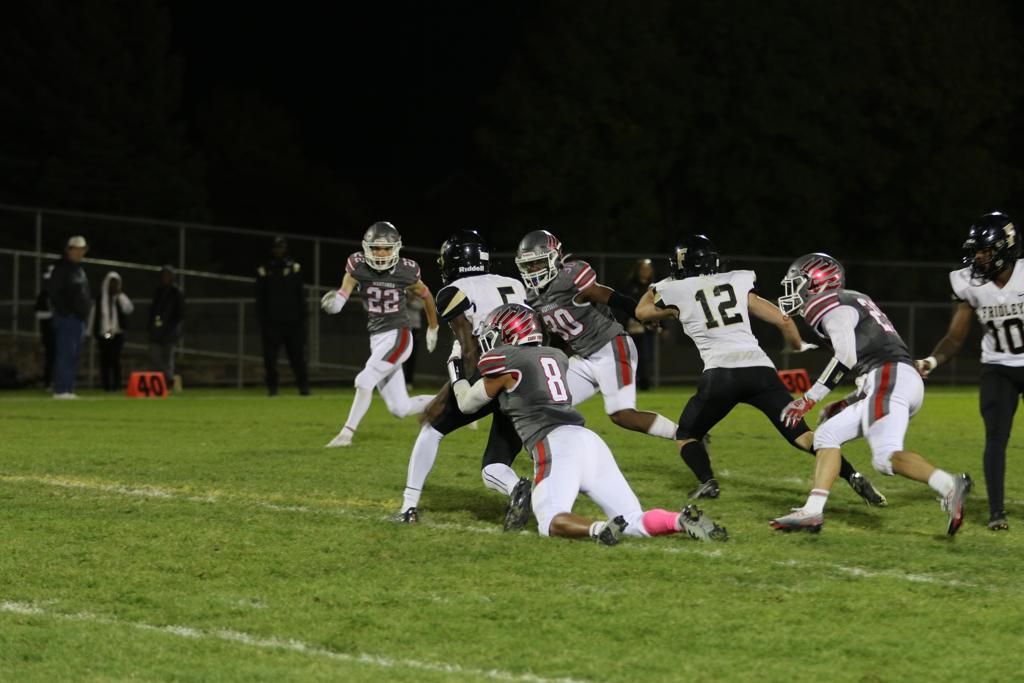 The Mound Westonka varsity football team overcame a sluggish first half in a hard fought 28-14 win against visiting Fridley in a Twin City Maroon Subdistrict rivalry game at Haddorff Stadium on Friday night. The White Hawks, in their first challenge of the season, found themselves down 7-0 at halftime to the Tigers (3-2). It was the first time that the Mound Westonka Defense had allowed any points in the first half this season.

With the win, Westonka moves to 5-0 overall and clinched the Twin City Maroon Subdistrict Championship for the second year in a row. This is the White Hawks’ fifth Subdistrict Championship in the last eight years. The ‘Hawks and Tigers had identical numbers on the ground in the first half rushing for 91 yards on 21 carries. The difference was a 67-yard Fridley touchdown pass from senior quarterback MJ Newton to wide receiver Jack Reynolds on a nifty wheel route down the right sideline. Reynolds caught the ball around midfield and outraced the Westonka secondary to the pylon on their first play of the second quarter. “Hats off to Fridley on that play call," said head coach Nick David. "They caught us in a coverage that we probably shouldn’t have been in and capitalized on it. Fortunately, we were able to make some adjustments after that and kept their passing game in check for the remainder of the game.”

On Fridley’s first possession of the game, Fletcher Anderson recovered a third down fumble after Matt Oko sacked Newton, setting up Westonka inside the Tigers 10-yard line. However, the White Hawks offense stalled out as junior QB Carter Reinbold threw an incomplete pass in the end zone on fourth down.

Playing without leading rusher Tyler Albert for the first stanza, the White Hawks struggled picking up first downs where they normally move the chains at a 44% clip. The second quarter proved to be different with Albert back toting the football. Westonka was able to move down the field, but once again, came up short on fourth down as Reinbold’s keeper up the middle was just inches short of the Fridley 10-yard line with 7:05 to play. Field position was a key factor in the first half, and helped the White Hawks defense as the Tigers offense started inside their own 20-yard line five times.

Senior kicker Ben Neve, who also dabbles as a goalkeeper on the Westonka soccer team, has been steady all season kicking extra points (26-27). However, it’s been his precise kickoffs that have been so impressive. His pooch kick to the right sideline, to start the second half, back spun like a pitching wedge at the Fridley 22 allowing sophomore John Seemann to pounce on it. “Ben has been a weapon for us on Special Teams all year," said coach David. "With Ben kicking each week we feel like we can steal a possession from almost every opponent we play due to his accuracy.”

A couple plays later, Reinbold hit Albert on a swing pass that he took and weaved through the Tigers defense for a 9-yard score and a 7-7 tie with 11:19 remaining in the third quarter. The White Hawks defense held Fridley to 13 yards on their next series giving the ball back to the offense. Albert and Reinbold led the Westonka offense down the field, capping off a long drive with an Albert 2-yard plunge at 3:56 of the third, giving the White Hawks their first lead of the game 14-7.

Legendary coach and broadcaster Lee Corso’s “Not so fast my friend” saying came into play on Fridley’s very first play from scrimmage following Albert’s TD. Newton (15 carries, 114 yards) had the ball snapped over his head back to the 26-yard line, however he scrambled to pick up the ball, eluded three defenders in the backfield, and escaped out to the left where he stutter-stepped another Westonka player and eventually weaved back to the right scampering just inside the right pylon for an exciting 74-yard touchdown run and a 14-14 tie game. “We knew coming into the game that we had to stop MJ Newton if we were going to be successful on defense as he is one of the most electric players in the Metro Area," said coach David. "Outside of this one play, I thought we did a great job in doing just that. I was proud of how the boys responded after giving up this big play. They didn’t hang their heads or feel sorry for themselves. They just went right back to work.”

Being challenged for the first time all season, the Westonka coaches and players showed resilience in the second half. Reinbold (7-17 for 96 yards), completed six of those in the second half finding Albert, senior WR Kade Tappen, and sophomore Max Kraay, who found the end zone on a nice over-the-shoulder catch from 18-yards out with just 25 seconds left in the third quarter. Neve’s extra point gave Westonka a 21-14 lead.

An Aaron Kroese one-handed interception, while falling back to his right, set up the White Hawks at their own 48-yard line. Reinbold (17 rushes, 83 yards) took advantage of the turnover with his own highlight play, weaving through the Tigers defense before running through a defender at the five-yard line and spinning into the end zone for a 27-yard touchdown and a two-score lead. Senior safety Will Wallace fell on a muffed snap on third down with 8:35 to play, and then the Mound Westonka defense held for a turnover-on-downs on Fridley’s final possession preserving the 14-point victory. 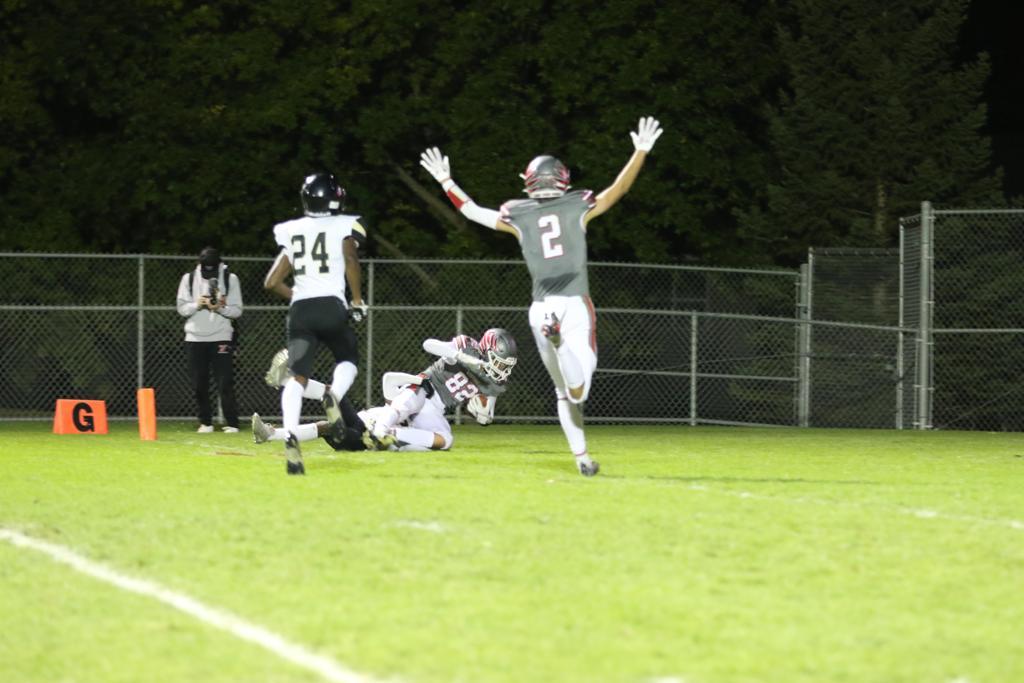 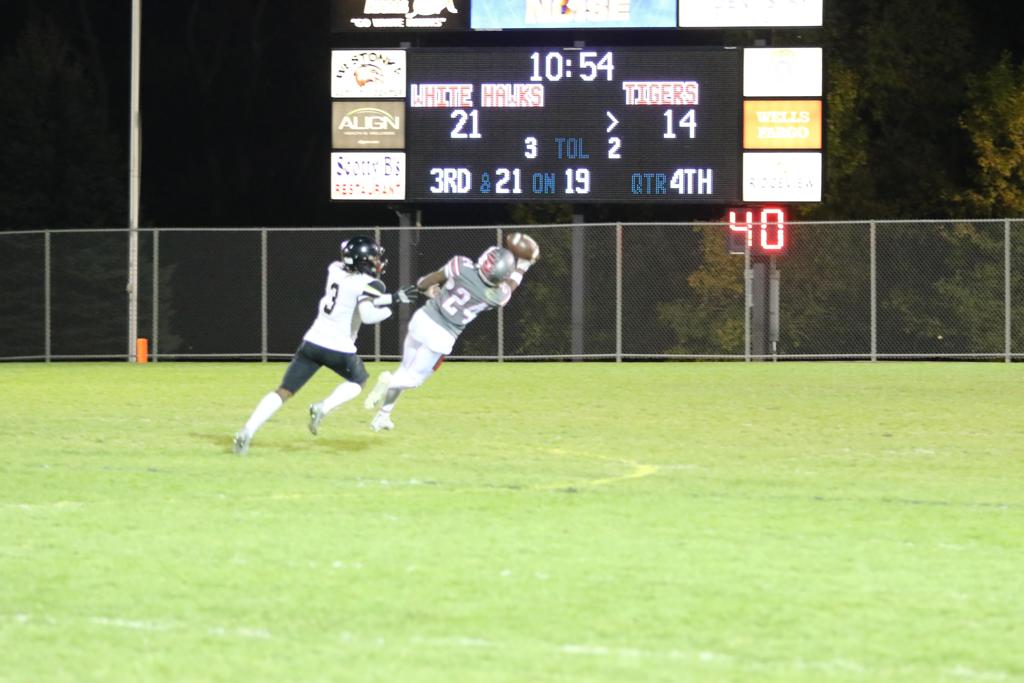