Mound Westonka girls soccer had one easy win last week against Mayer Lutheran, but either side of that they suffered two close losses, in almost identical fashion. 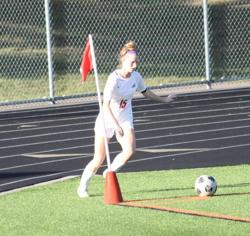 Mound Westonka girls soccer had one easy win last week against Mayer Lutheran, but either side of that they suffered two close losses, in almost identical fashion.

The first loss of the week was against Delano on Monday September 19. Delano is a perennial tough opponent who got the better of the White Hawks last year by five goals to one. This year, it was clear that the game was going to be much tighter. Mound Westonka started brightly and took the lead in the 10th minute when senior captain Alaina Mather took a corner from the left side. This allowed Mather to curve the ball back towards the goal, and the corner kick sailed in over the goalie’s head, untouched by anyone else.

Delano leveled the score at the half hour mark when they got a lucky bounce off the cross bar on a free kick that then fell favorably to an unmarked attacker. Delano took the lead early in the second half, and the White Hawks were unable to recover. Time ran out with Mound Westonka on the losing end of a 2-1 scoreline.

The next night, the White Hawks faced Mayer Lutheran and were able to gain an easy 8-0 win. Goals rained in at regular intervals all game long, including goals in the first minute of each half and a final goal in the last minute of the game. Seven different players scored: juniors Elizabeth Eberhart, Sienna Loughlin and Ava Sylvester, and seniors Alicia Hatlestad (2), Taylor Dallman, Jordyn LaRue and Audrey Courtney Bernal.

To round out the week, Mound Westonka traveled to Watertown to face the Royals, an opponent who have had the better of them the last several seasons. Just like in Delano, the White Hawks looked strong right out of the gates and took an early lead.  Dallman sent through an inch perfect pass to Hatlestad on the right side of the penalty box who then took a sharp shot across the goal.  Watertown’s goalie produced a great save that pushed the ball to the left side, but Eberhart had raced up the wing to collect a possible rebound and her energy paid off as she sent a shot over the goalie’s head.

At about the same time Westonka gave up the lead in Delano, the same thing happened in Watertown. This time the MWHS team found themselves disputing a throw-in call by the referees that appeared to go their way but was called in favor of Watertown.  The Royals just got play going and caught the White Hawks defense flat footed.  Watertown got a shot off, but it took a huge deflection that gave Westonka’s goalkeeper, senior Ashlee Johnson, no chance to make a save.

Mid-way through the second half, Watertown Mayer took the lead on a penalty kick, which was awarded after a scramble in the box involving several players. The last quarter of the game was all Westonka, and they were unlucky not to score an equalizer.  Notably a couple of senior defenders, DJ Christensen and Abby Hollenstein, both took long free kicks that looked like they were going in. Christensen’s effort sailed just over the goal, and Hollenstein’s effort went even closer as it rattled off the cross bar.  It was not to be, and Westonka had to settle for another 2-1 loss.

Westonka had the exact same result last year against these three teams, two wins and one loss, but in all three games, the score improved greatly over last year. What the White Hawks need next is to turn one of these close losses into a signature win that will propel them into the section playoffs in a couple of weeks’ time with confidence that an elusive playoff win is possible.