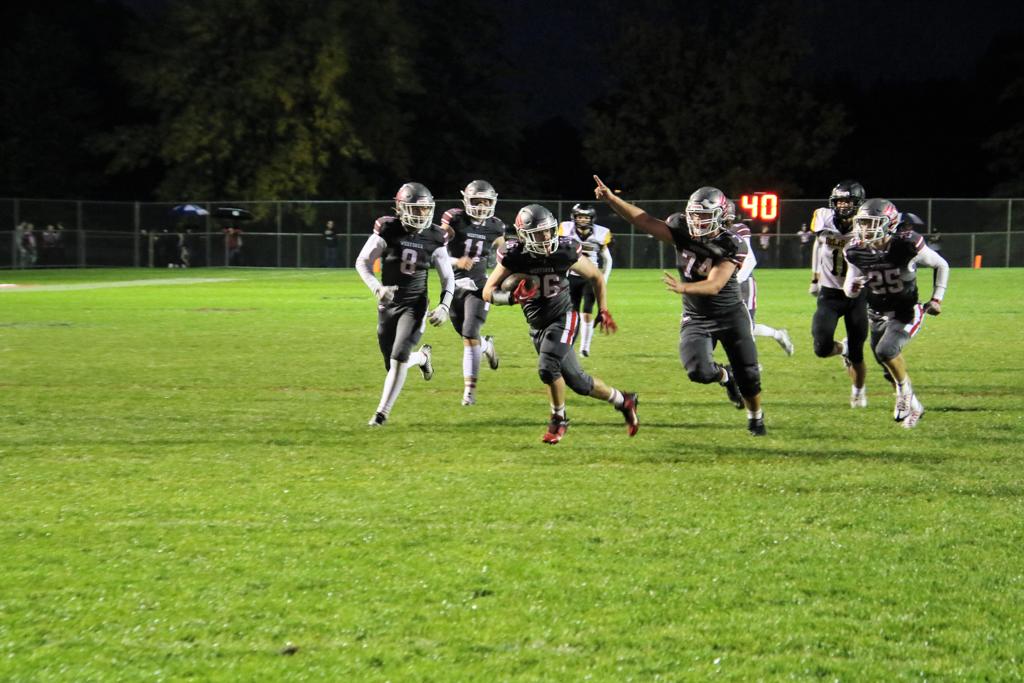 Defense and special teams played a big part in Mound Westonka’s 54-8 Homecoming football win over visiting DeLaSalle last Friday night in a Twin City District matchup. The game was played in a steady rain for most of the first half, which led to junior linebacker Jaaron Konkel capitalizing on two Islanders mistakes.

The first blunder came when the DeLaSalle quarterback couldn’t control the snap and Konkel swooped in and ran it back 24-yards for the touchdown with 21 seconds remaining in the first quarter. Then, sophomore Aaron Kroese got through and blocked the Islanders’ punt after a bad snap, allowing Konkel to scoop up the loose ball and motor in from eight yards out for an early second quarter advantage (34-0). “The weather really made it difficult for both of us teams to hold onto the ball," said head coach Nick David. "Because of that, we were able to capitalize on a couple of these DeLaSalle miscues early on. Konkel is an extremely selfless player who has been a huge part of our success on defense this season, so it was really cool to see him record both defensive scores.”

Mound Westonka, who moves to 4-0 on the season, was paced again by running back Tyler Albert. The senior finished with 101 yards on the ground on just 12 carries. His 41-yard scamper late in the first quarter gave the White Hawks an early 13-0 lead.

The defense was up to the task as they held DeLaSalle to -6 yards on 27 plays in the first half. In fact, the Westonka defense took advantage of the wet conditions, holding the pass-oriented Islanders offense to just five passing yards in the first half. Senior Matt Oko had a stellar game with five tackles (1 TFL) and contributed a quarterback pressure. Fletcher Anderson and Drake Woodruff both chipped in with five tackles. Seniors Sam Dioszeghy and Will Wallace each had four apiece. Sophomores Beck Jenson and Carter Kleinsasser each tallied a QB sack to go along with two tackles. Mound Westonka held the Islanders to just 1-of-10 on third downs allowing only six first downs. “Though we are young on defense, we are getting better and better with each week," said coach David. "Tough, hard-nosed defense has been the backbone of our football program for years and it has been really fun to see our young defense grow with each opportunity they get. They are really starting to fly to the ball.”

The White Hawks continued their barrage of points as they almost matched their season average of 55 however, the rain slowed the potent offense until Carter Reinbold found Anderson (2 catches, 48 yards) for 17 yards on a 4th and 10 from the DeLaSalle 32-yard line. A couple of plays later, Reinbold kept it himself for a 2-yard TD and a 7-0 lead. Wallace (3 carries, 32 yards) took an end around for a 14-yard touchdown, as did senior Cam Peterson on a 1-yard run to close out the first half.

With most of the starters sitting in the second half, Mound Westonka had the opportunity to play a number of different players. Quarterbacks Gavin Leuthold and Cole Drill guided the White Hawks the rest of the way, as junior Jacob Hansberger got the bulk of the carries rushing for 46 yards on seven carries. Junior TE Owen McCue also had a nice 16-yard run as he ran for 21 yards on just two attempts.

Reinbold finished 6-11 for 119 yards and two touchdowns through the air. The second passing TD went to Kade Tappen on a 30-yard strike. Leuthold was 4-7 for 21 yards passing. Senior Luke Leonard had two catches for 32 yards, while McCue and junior Isaac Paul each had two catches.

The White Hawks return to action this Friday night at Haddorff Field taking on Twin City Maroon Sub-District foe Fridley High School. Fridley enters the game with a 3-1 overall mark, and is 2-0 in the Twin City Maroon Sub-District. Fridley has been a team to beat in Class 4A over the last decade, qualifying for the state tournament six out of the last seven seasons. The Tigers will bring a potent rushing attack to Mound Westonka, as they average nearly 250 yards per game, while their defense has amassed ten turnovers, including seven interceptions. 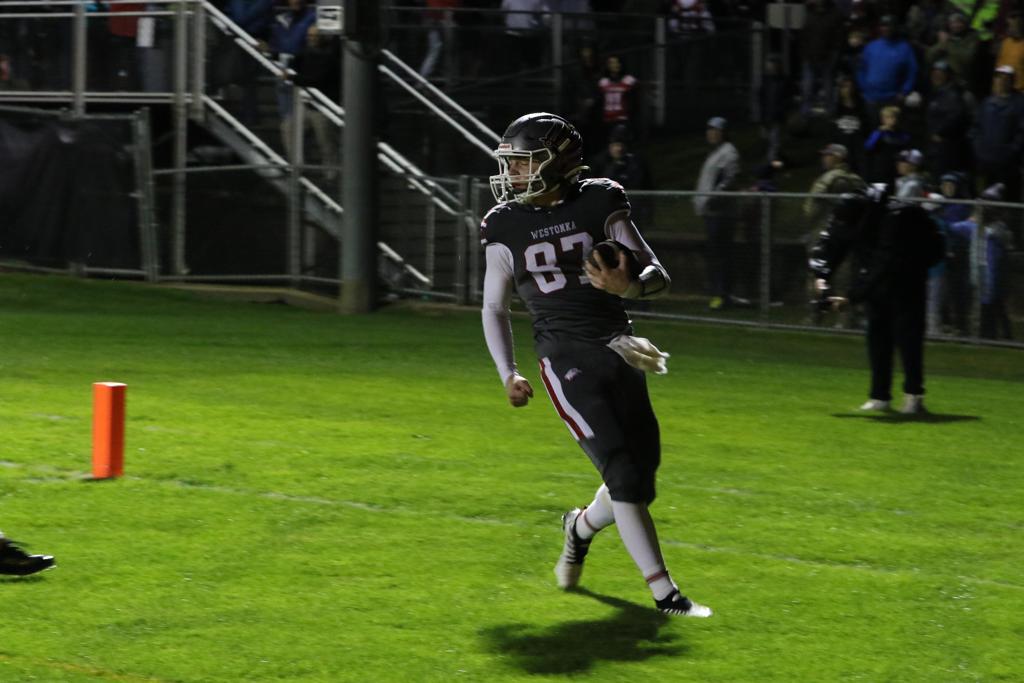 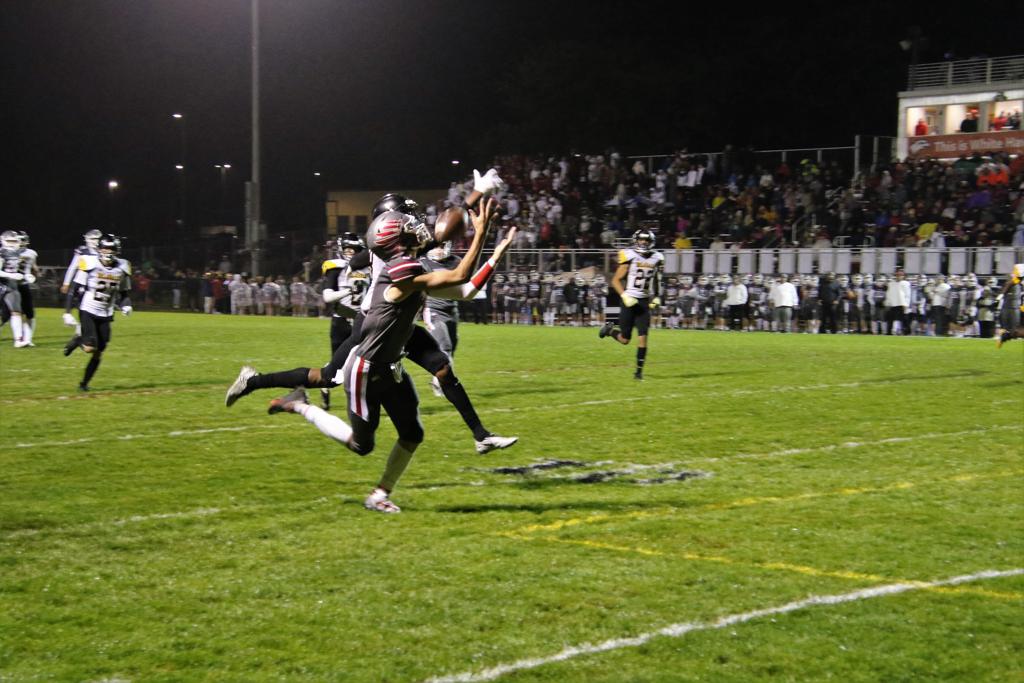