Westonka boys soccer had a trio of games over the last week and came out on top in all three. 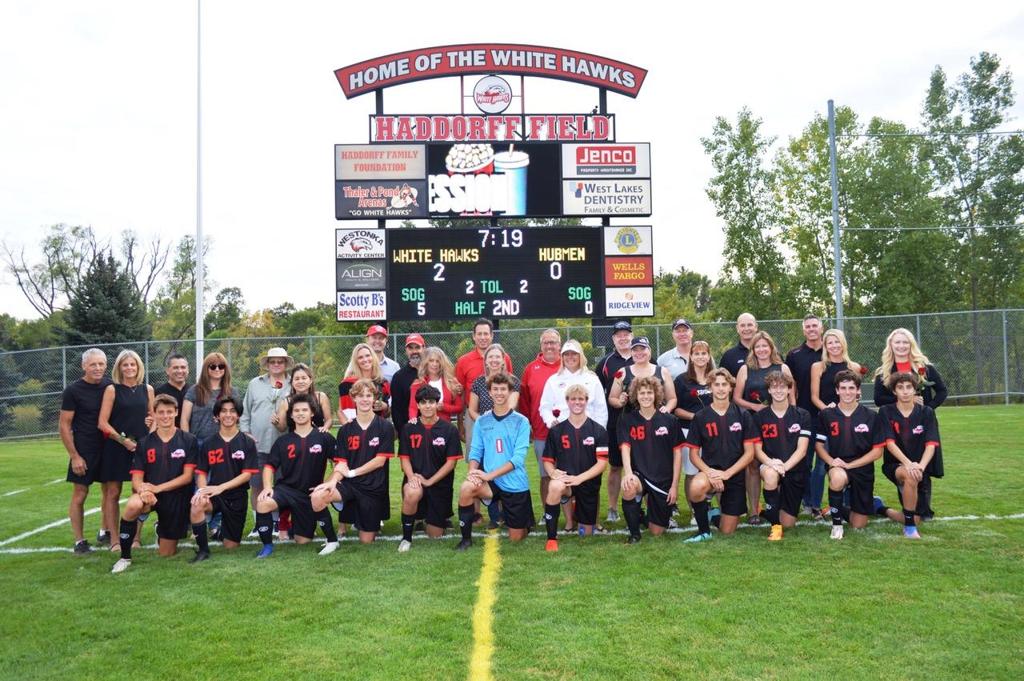 The MWHS boys soccer seniors and their families celebrated Senior Night on September 15.

Mound Westonka High School boys soccer had a trio of games over the last week and came out on top in all three.

The Jordan Hubmen came to Westonka on September 15 for Senior Night. The White Hawks started an all senior lineup, and the seniors delivered. After a flurry of early activity, senior Daniel Kaczanowski jumpstarted the scoring off a nice header from a throw in by senior Payton Kasper, using one of his impressive flip throws. The White Hawks kept up the pressure, and senior Logan Kevitt threaded in a nice cross that was deflected by the Hubmen for an own goal, putting the White Hawks up 2-0, which was the score at half.pio

The 12 graduating seniors were recognized at halftime. Most of the boys have been playing soccer since they were 4 or 5 years old, so this was a nice send off. When game play resumed, the Hubmen pushed the pressure until a foul in the box resulted in a Westonka penalty kick, taken by exchange student Francesco Pio Malamisura, but the Hubmen keeper made a great stop to keep the score at 2-0. The White Hawks continued to press with a flurry of attacks as the game wore on, but the Hubmen keeper kept the home team from scoring again. Final score 2-0.

Next up was an away game in New Ulm on September 17. The day was a hot one, with the temperatures in the mid 80s, baking the turf field. The boys opened strong, taking several shots that were stopped by the Eagles keeper until junior Jack Moch put the visitors on the board 13 minutes into the game off a corner kick. The White Hawks would keep up the pressure, and ninth grader Leif Hagen scored at 22 minutes off an assist from Kaczanowski, putting the score at 2-0. The White Hawks defense held strong to finish the half with a clean sheet.

The White Hawks struggled to get another score in the second half, taking several strong attempts that were stopped or off target. The Eagles never really threatened, and the White Hawk keepers managed another shutout. Final score was a hard fought 2-0 win.

The White Hawks traveled to Delano on September 19 for a conference rivalry. With the White Hawks sitting atop the conference standings, the boys knew going in that this was going to be a tough match. The Tigers started off strong with several quick shots on goal, but senior Ben Neve made some great stops to keep the White Hawks even.

The Tigers kept up the pressure, attacking with some nice passing and a shot advantage that pushed the White Hawks defense for the first 15 minutes of game time, when the visitors picked up the pace and matched the intensity of the home team. The White Hawks had several chances that didn’t net until Malamisura dribbled into the box at 29 minutes in and was fouled, setting up junior Brett Bartkowicz to take the penalty kick. His first attempt hit the back of the net, but the refs had blown the whistle, giving both Bartkowicz and the Delano keeper a chance to reset. The second shot went to the top of the net, putting the White Hawks up 1-0. Malamisura dribbled through traffic in the box at 34 minutes and poked in a second goal before half.

The White Hawks maintained the intensity in the second half, and White Hawks keeper junior DJ Zattler made several great saves to stop the Tigers, but the home team managed a great one touch shot off a corner clearance at 52 minutes, making the score 2-1. The White Hawks continued to take their chances, including several close shots that went just wide of the net, while preventing the Tigers from getting the equalizer. As the final whistle blew, the White Hawks won 2-1.

Next up: away at Watertown-Mayer on 9/22 and home vs Holy Family on 9/27 (also Chili Cook-off fundraiser!).