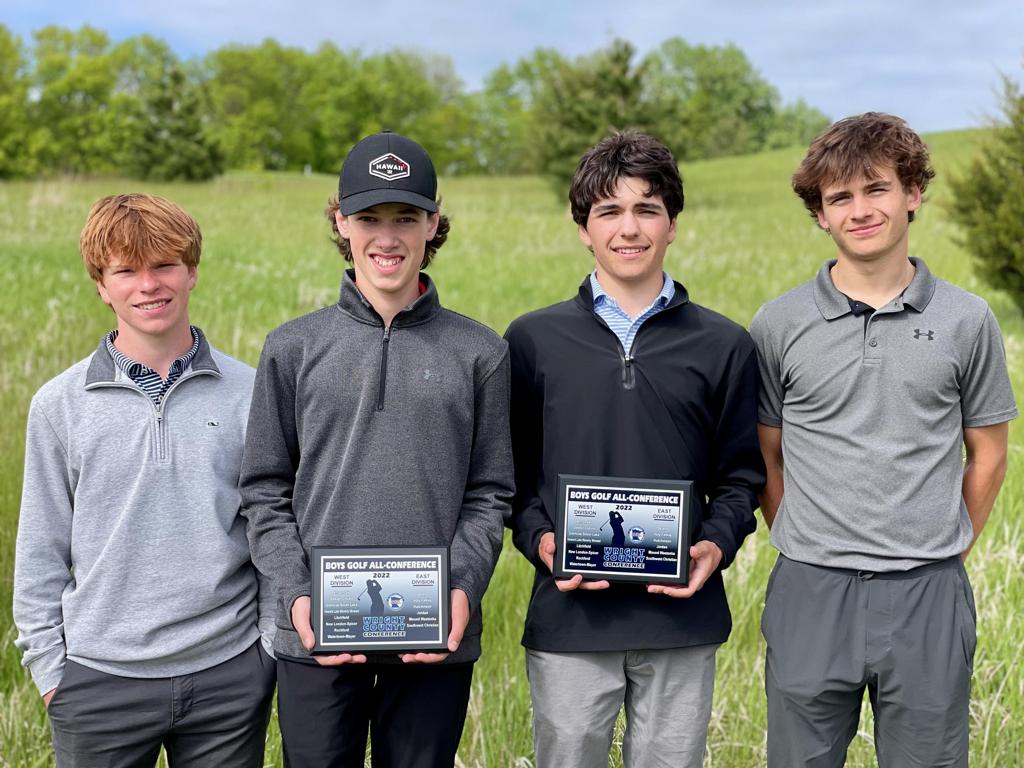 The Mound Westonka boys golf team played its final conference meet of the season on May 23 at Island View Golf Club in Waconia. They had a beautiful sunny day with temperatures in the 60s.

The conference season includes six matches at different courses - three 9-hole rounds, and three 18-hole rounds. To determine the team champion, all six rounds are added, and the winner is the team with the lowest total.

Going into the final meet, Holy Angels had won three of the previous matches, with Mound Westonka and Delano each winning one. Holy Angels appeared to have first place locked, but second place was up for grabs. The White Hawks were up to the challenge, finishing the meet 15 strokes ahead of Delano to easily claim second.

Head coach Andy Atkinson commented, "I am proud of the team for continually improving throughout the season. At one point, we were in fourth place overall. But with continued practice and intrasquad competition, the lads were able to consistently improve their scores to finish in second place behind Holy Family."

To determine All-Conference individuals, all six rounds are added, and either two 9-hole scores or one 18-hole score is dropped. This helps to account for if a golfer has one bad round, or even misses a meet. All-Conference goes to the nine individuals with the lowest totals. The White Hawks had four golfers go into the meet with good odds, and all played well to take home honors.

Junior Matthew Uhas cemented his All-Conference standing by shooting a 77, good for third place in the meet. Uhas had a great day with 14 pars.

Eighth grader Luke Sunnarborg earned his first All-Conference award, claiming fifth place at Island View with a 79. Sunnarborg had a fantastic front nine with two birdies for a 38.

Juniors Max Krebsbach and Mac Harmer each earned All-Conference Honorable Mention for the season. Krebsbach shot an 83 at Island View, with Harmer shooting an 85.

The White Hawks had their last regular season meet on May 26 at Pioneer Creek Golf Course in Delano. It was originally scheduled as an 18-hole meet for May 25, but rescheduled to May 26 due to rain, and shortened to 9-holes. The Tiger hosts won this one, with the White Hawks close behind in second.

Mac Harmer played a great round with seven pars on his way to second place with a 38. Uhas claimed sixth place with a 41, and Krebsbach was right behind him, with a 42 for tenth place. Senior Jack Eberhart and Sunnarborg contributed the final score, both shooting 44.

Next on the schedule for Mound Westonka is the Section Tournament. The team will play 36 holes on June 2 and June 6 at Pebble Creek Golf Club in Becker.