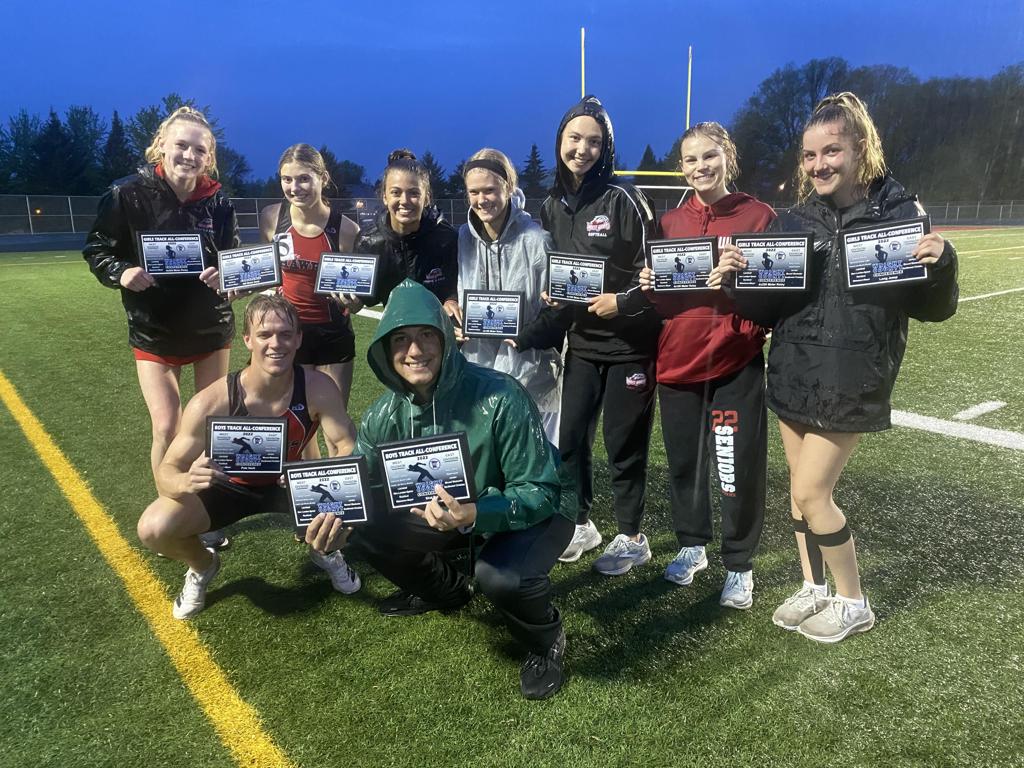 The Mound Westonka White Hawks Track & Field team competed in the Wright County East Conference Championships last Tuesday, May 17.  The White Hawks had a great day, with the girls finishing in second place and the boys in fourth place. The second-place finish was the best finish for the girls team in over 10 years.

The team had several Conference Champions, earning the athletes All-Conference honors. A double winner for the White Hawks boys team was junior Samuel Dioszeghy in the shot put (47’11”) and discus (151’2”). Dio had an amazing last throw in the discus to secure the win and also set a conference record. Junior Payton Kasper won the boys pole vault, tying his school record of 14’6”.

On the girls side, senior Allison Soule won the 400-meter dash, with a personal best time of 1:02.08. Sophomore Makenna Seitz won the long jump with a jump of 15’6”. Teammate ninth grader Reese Kasper tied Seitz with a 15’6” but finished second in the tiebreaker. Both girls had personal best jumps.

The White Hawks girls had a great day in the sprint relays. Winning the 4x200 with a time of 1:49.56 were Soule, Seitz, junior Abby Hollenstein and junior Micah Boyce. In the 4x100, Boyce teamed up with ninth grader Avery Olson, senior Bella Lund and senior Kennedy Schmidt to win that relay with a time of 50.95.

Other female athletes finishing in the Top 6 and scoring team points included Olson, Lund and Christensen, finishing second, third and fourth in the 100-meter dash. In the 200-meter dash, Boyce finished second, while Olson finished fourth. In the 400-meter dash, Hollenstein finished in fifth place. Ninth grader Audrey Kirscht had a great race in the 800-meter run to finish in third place.

Junior Laura Sunnarborg had two great races in the distance events, finishing third in the 1,600 and second in the 3,200 meter run. Seventh grader Sophia Engesser finished fifth in the 3,200.  Senior Anna Elliott earned points in the 100 meter hurdles and 300 meter hurdles, finishing in fourth and sixth, respectively.

In the field events, senior Libby McCue finished fifth in the shot put, while teammate junior DJ Christensen was fifth in the discus. Eighth grader Lexie Rehman, Miner and senior Isabel Newell all finished in the Top 6 in the high jump, and Kasper was sixth in the pole vault. Junior Diego Figueroa was third in the triple jump. Finishing in sixth place was ninth grader John Seeman in the discus, junior Noah Wolf in the triple jump and junior Dimitri Anderson in the long jump.

The White Hawks compete Thursday, May 26, at the Rockford Last Chance Meet, and then May 31 and June 2 at the Section 6AA meet hosted by Orono.