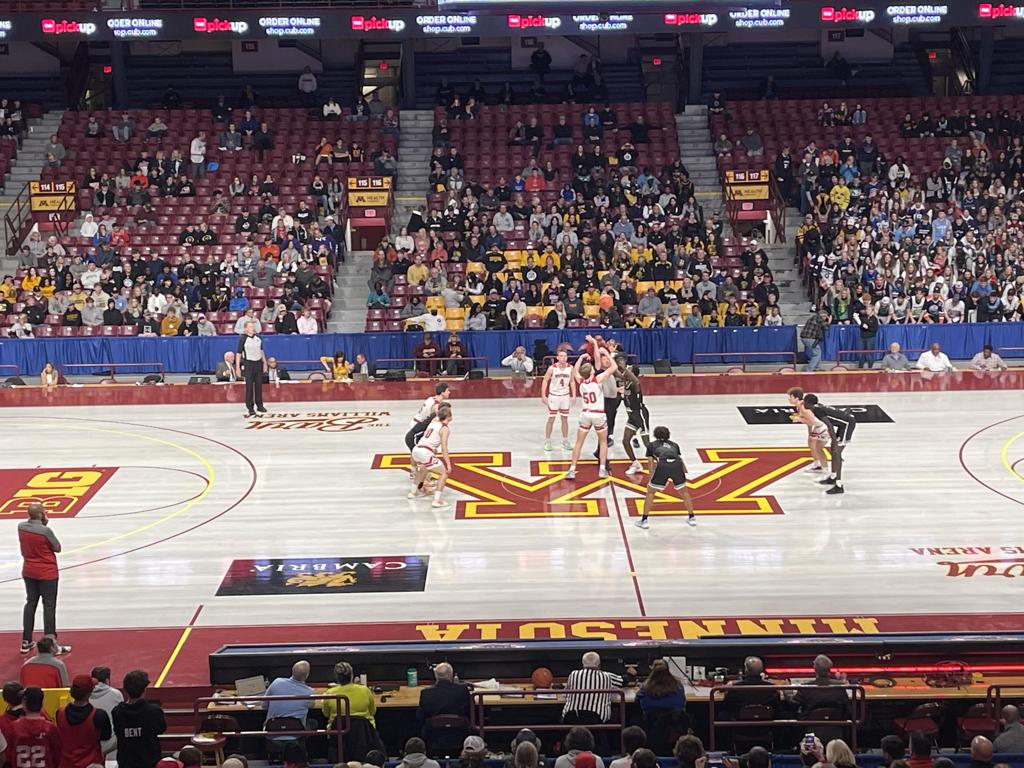 Tipoff at the March 22 state quarterfinal game between the Westonka White Hawks and the Mankato East Cougars at Williams Arena.

The Section 6AAA Champion Mound Westonka High School made a historic appearance in the MSHSL Boys Basketball State Tournament this week. The White Hawks finished fifth overall in the program's first trip to state since 1974.

The Westonka faithful were out in full force at Williams Arena for the state quarterfinal game Tuesday afternoon. After falling behind 25-29 at the half, the No. 4 Mankato East Cougars charged back to overtake the No. 5 White Hawks for a final score of 68-55.

It was a Hawks showdown at Concordia University the following day, with the White Hawks facing off against the Hermantown Hawks in the consolation semifinal. Westonka came out on top, 64-59, to move on to the fifth-place game. MWHS senior Jason Spaeth had 14 points against Hermantown to break the all-time scoring record set by Jeremy Berg in 1998.

In their third game in three days, the White Hawks met St. Cloud Tech in the consolation final Thursday at Concordia. In a great back-and-forth contest, MWHS defeated Tech 65-61 for a fifth-place overall finish at state. Senior Jake Dallman led the White Hawks with 19 points in the consolation championship. Spaeth also added 18 points to his career scoring record and shot 4-for-7 from 3-point range.

“What an incredible run for these boys, for the coaching staff and for our community,” said Westonka Activities Director Jeff Peterson. “After a 48-year drought, our program experienced something special.”

The White Hawks graduate six seniors this year: Spaeth, Dallman, Jack Eberhart, Tyler Von Bank, Jake Gaylord and Max Swanson. “This is a special group of seniors who chose to stick together and grow together,” Peterson said. “Although they will be missed, they left us with something to continue to strive for. Go White Hawks!”