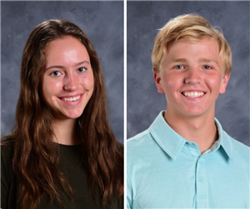 This is the 26th year that the League has sponsored the ExCEL Award. An independent panel of judges from schools throughout Minnesota will select state ExCEL Award recipients in January, and award winners will be announced via the League website on Feb. 1.

“Laura and Will are great students and outstanding representatives of our school,” said Westonka Activities Director Jeff Peterson. “Congratulations and good luck to them as they move on to the state level of competition.”

Sunnarborg is a three-year member of the DECA Club, where she coordinated thousands of hours of community services as the Community Service Coordinator. She is a two-time internationals qualifier, as well as a two-time state finalist and high test scorer. She serves as vice-president of the Environmental Club, where she is credited with growing the club from just five members to over 50. In addition, she is a three-year member of the Student Senate and currently serves as Communications Officer. She is a member of the Fellowship of Christian Athletes, Link Crew and NHS, in addition to maintaining a spot on the “A” Honor Roll.

Sunnarborg is a long-time runner, earning accolades in both cross country and track at MWHS. She has earned letters in both sports since she was a seventh-grader. In cross country, Sunnarborg was named Westonka Girls Runner of the Year for five consecutive years. She has been named Hardest Worker, earned several Spirit awards and multiple Commitment to Excellence awards. She was named All Conference each year since eighth-grade and is a two-time captain. She is a three-time state qualifier and was named Academic All State as a junior.

Sunnarborg was a three-year member of the Math League and Speech team, earning the Degree of Excellence in Speech. She also sang in choir and served as house manager for the school play as a sophomore.

Outside of the classroom, Sunnarborg has volunteered with the Westonka Food Shelf, NHS tutoring, Feed My Starving Children and multiple church events. She also spent time on a variety of DECA events and coordinated Homecoming junior sweatshirt sales and the Powder Puff game.

One activity Sunnarborg is especially proud of is last year’s DECA Community Giving Chapter Project. “Our three-person team had two goals – to give back to the community and to help the planet, and we achieved both through our Net Zero project,” she said. In an effort to prevent items from going to the landfill, the group collected over 3,500 stuffed animals that were donated to the Hennepin County Police Department to provide to children experiencing difficult times.

“This event really brought the community together,” said Sunnarborg, noting that KARE-11 television even did a news story on the project. “Net Zero taught me that I can make a difference in the lives of others.”

MWHS biology teacher Wendy Richards serves as advisor for the Environmental Club. “Laura is a student who undeniably pushes herself to grow, learn and inspire others,” said Richards. “I have no doubt that the success of the Environmental Club is largely due to Laura’s leadership. Not only have the numbers grown, but the impact the club has is undeniably related to the way Laura has crafted groups of students who are passionate about making a difference in the school and community.

“The skills Laura has a leader to help others learn and achieve their goals are unmet by any other student,” Richards added.

Laura is the daughter of Alicia and Michael Sunnarborg of Minnetrista.

Wallace is a three-sport athlete, participating in football, basketball and track. In football, he is a member of the Leadership Council and two-year member of the Silver Level Team. In track, Wallace was a section meet participant as a sophomore, when he earned the Hardest Worker Award.

In addition to his school activities, Wallace has spent many hours in Boy Scouts, serving in multiple leadership roles. As part of his journey to becoming an Eagle Scout, Wallace had to facilitate and lead a project that benefitted his community, choosing to upgrade the football team’s equipment shed area. “This experience gave me the opportunity to learn how to manage and lead a project of this scale, and helped me discover what methods of leadership worked best for who I am as a person,” said Wallace.

Wallace said it was challenging to put his ideas and vision of the project into the minds of the people who helped him, which led to countless mistakes and errors. “The rewarding part of this project was seeing how others reacted to it and how much it helped benefit the varsity and youth athletic programs for my school and community,” he said.

MWHS biology teacher Wendy Richards taught Wallace in class and coached him in track. “Will is a quietly strong leader, which I see as a rare and highly impactful skill,” said Richards. “Will coaches his peers in a way that is relatable and encouraging; it is undeniable that younger students latch onto Will because of his kind-heartedness and ability to make them feel welcome, safe and understood.

“Will is consistently willing to put in extra effort not only to succeed himself, but to push his peers to success as well,” Richards added. “He is one of the most dependable, kind and sincere leaders I have been honored to teach and coach.”

Will is the son of Mike and Kristin Wallace of Mound.