White Hawks Boys Soccer Off to a Strong Start

Storms right up until kickoff did not dampen enthusiasm for the first game of the Mound Westonka Boys High School soccer season against Waseca on August 26. 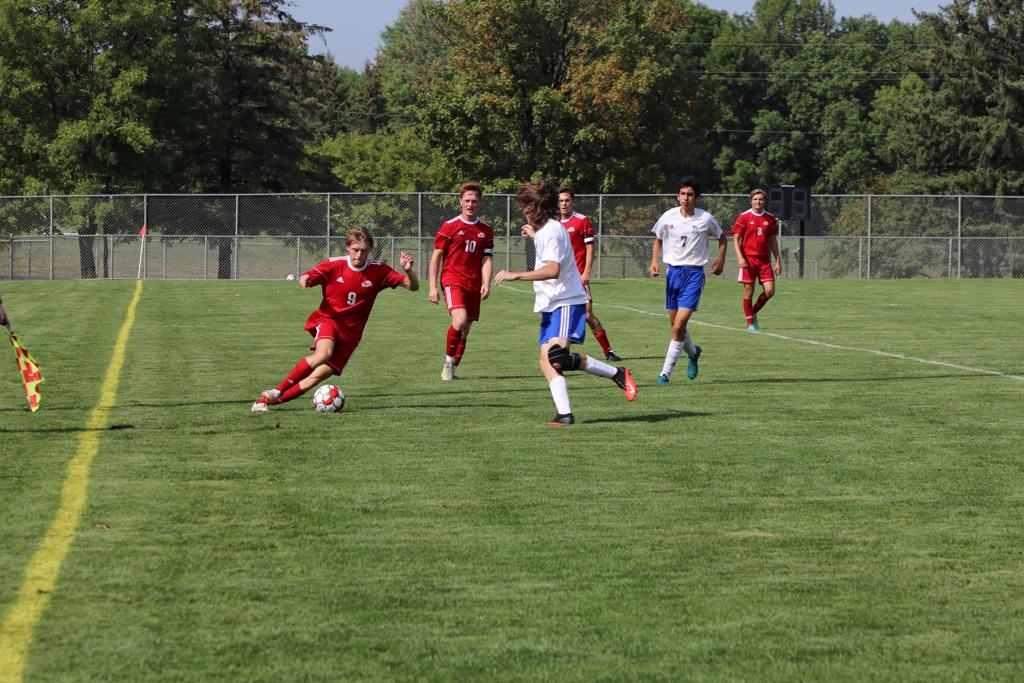 Storms right up until kickoff did not dampen enthusiasm for the first game of the Mound Westonka boys soccer season against Waseca on Thursday, August 26.  The team is returning many key players from last season, including five–year varsity starter senior captain Michael Doshan and outstanding goalkeeper senior Owen Beckley.  There are seasoned varsity-level players in most key positions and the team looks solid from front to back.

The coaching staff is largely unchanged with Coach Manuel returning for his third year as head coach, along with long-time assistant coaches, Coach John Thomas and Coach Thomas Weltin.  Westonka graduate JJ Jimenez is the only newcomer to the coaching group, and he is taking the C-Squad this year.

Coach Manuel has high expectations for the squad this year: “We are a passing team well suited for grass and artificial turf fields.  We are well balanced with experience and youth and we have a very strong senior class which bodes well for a sustained run of results.  Also, the junior varsity and C squad have large sophomore and freshman classes with lots of raw talent mixed with athleticism”.

The Waseca game started very well indeed for the White Hawks.  In just the third minute, a perfect corner delivered by senior captain Manu Jordan was headed goal bound by sophomore Brett Bartkowicz.  Senior Drew Swanson connected on the pass and slotted it home for the first goal.

The White Hawks added to their tally in the 16th minute.  Doshan set up Bartkowicz on a breakaway, which drew a foul from the Waseca defense.  Doshan alertly took a quick free kick which opened up junior Payton Kasper for a goal in his first game with the team.

Senior Alec Hruby scored the third Mound Westonka goal just after half time when he pounced on a poor defensive clearance from Waseca.  Hruby added his second goal just 10 minutes later.  Kasper, who is also an accomplished gymnast, delivered a really long throw-in into the penalty box using a rarely used and extremely hard to execute “flip throw” technique.  The throw caused major confusion in the Waseca defense and after an initial shot from Swanson was saved, Hruby drove home the fourth goal of the game.

The White Hawks boys team looked very good in this first outing of the season and were worthy winners.